Webinar: The Role of Ginger in Functional Foods for Improving Gut Health

Ginger lends itself to digestive support both during, and outside of, the winter months, because stress can impede digestive function as much as the strain from an overindulgence in holiday foods. Psychological factors have become strongly associated with functional dyspepsia – a disorder of exclusion given the absence of other structural upper gastrointestinal (GI) conditions. Led by symptoms including early satiety, epigastric pain and bloat, among others, functional dyspepsia is believed to affect approximately 20% of the population.

This webinar will explore how a concentrated ginger extract can help to strengthen gut health claims for functional food and beverages, and address the predicted increase in stress-related GI conditions as a result of the 2020 pandemic.

Volatile oils from pungent spices, like ginger, have recently been associated with olfactory-like sensory receptors found within enterochromaffin cells within the GI tract. These receptors receive messages in the presence of these chemicals – similar to the way that the nose smells them – which stimulate GI motility and help in symptom resolution. However, stress and neurological imbalances, including depression, anxiety and acute stress reactions can also lead to changes that affect dyspepsia through impaired neuronal signaling.

While the mechanisms underlying ginger’s potential role in GI health have become clearer, ginger supplementation for functional dyspepsia and other gut concerns has resulted in mixed conclusions. The preparation, storage conditions and format of use (fresh or dried) can lead to varying ratios of gingeroid actives, as well as their inactive derivatives. Culinary use provides indication of this differential, recommending ginger in different preparations to optimize levels of spiciness, pungency and even sweetness.

Given such a difficult 2020 for so much of the global population, the prospect of increased cases of GI distress is highly probable. Innovation in ginger manufacturing has recently allowed for a very high concentration of active ginger principles, without sacrificing stability or adding an excess amount of ginger inactives to the product unintentionally.

Gut health in 2021 will definitely benefit from an evolving perspective on ginger. This webinar will help move participants from what may be a more simplistic sentiment of ginger as a basic culinary spice or concentrated tea, to a solid solution to GI distress that is scientifically-proven, safe, highly stable and concentrated for easy low-dose applications.

Register for this webinar to learn more about how adding a concentrated ginger extract could boost the health benefits of functional food and beverages. 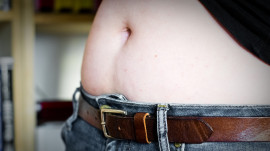